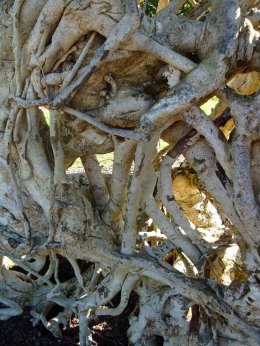 How long does it take to make the woods?

As long as it takes to make the world.

The woods is present as the world is, the presence

of its making forever greater than the act of its destruction.

From Sabbaths, by Wendell Berry

UK-based artist Angela Palmer had a mission. Together with the Size of Wales charity she has brought these magnificent mighty trees to a final resting place in the National Botanic Gardens in Wales. They have come from the forests of Ghana where they had fallen naturally or in adverse weather. Some are 300 years old. A mixture of species, they include trees of the Mahogany, Coca, Bean and even Elm families. Their journey has been circuitous over the past few years. The trees have been touring around the world, promoting their own cause. Ghana now manages its trees sustainably, but many countries do not and it was hoped to draw attention to this as well as raising funds for preservation projects by the Size of Wales charity. It was set up by Welsh environmentalists and called this as a reaction to Wales being commonly used as a standard size comparison for areas of rainforest being lost.

The Size of Wales charity announced on St David’s Day last week that it has achieved its target. It has raised over £2 million to protect an area of African rainforest the size of Wales.

Under unending interrogation by wind

Tortured by huge scaldings of light

Tries to confess all but could not

Stripped to its root letter, cruciform

Tried to tell all

Through crooking of elbows

Let what happens to it happen.

A Tree, by Ted Hughes

The poems are from a wonderful Common Ground anthology, Trees Be Company and I wanted to include a quote from the preface by Susan Clifford and Angela King

‘This book presents evidence of our deep cultural need for trees and woods. Our hope is that it will inspire people to take more care of them……trees stand for nature and culture. We shall stand or fall with them.’

Unfortunately although the book was published in 2001 this is still a necessary hope.

19 thoughts on “The Memory of Trees – Ghost Forest” 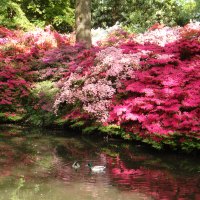