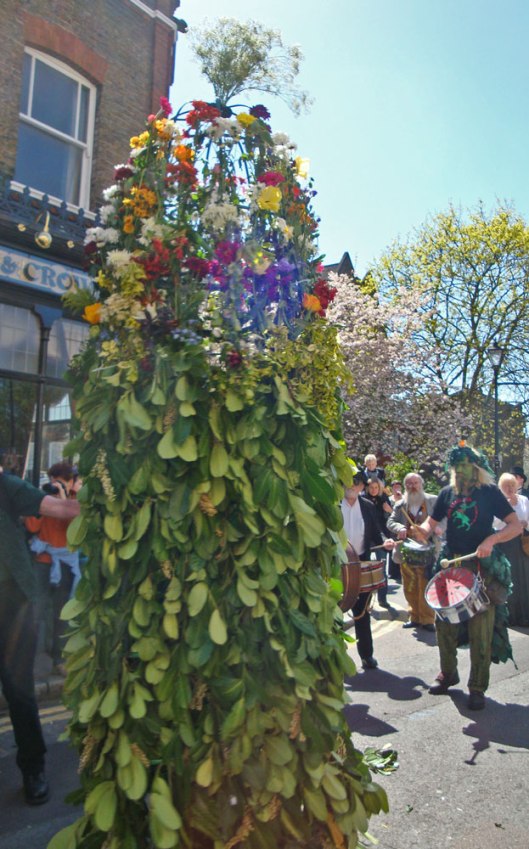 May Day in London and I am celebrating my birthday month in doing something I have always meant to do – following the Jack in the Green as he is brought back to life to celebrate the fertility of spring, the closest we come now to the Green Man and celebrating the originally pagan time of Beltane, a time of regeneration and  the beginning of summer. This Deptford Jack is joined by a motley crew of participants, musicians, dancers, anyone who cares to join in, led by Fowlers Troop, a revival of the early 20th century revellers troop of that name, and this year processing from Deptford around Greenwich.

Jack, do you never sleep —
does the green still run deep in your heart?
Or will these changing times,
motorways, powerlines,
keep us apart?
Well, I don’t think so —
I saw some grass growing through the pavements today. 18th century Jack in the Green in London

Jack in the Green traditions go back much further than the 20th century of course and have been thoroughly documented by Roy Judge in his book on the subject. Latterly associated with chimney sweeps and maybe before that milkmaids and their garlands they are part of the mass of folklore surrounding May Day. Meanings and associations of May Day change over time and are still changing, now being best known as International Workers Day, and despite attempts to diffuse marches, protests and other allegedly dissident behaviour by moving the bank holiday to the nearest Monday this survives. I didn’t manage to fit in the rally from Clerkenwell Green to Trafalgar Square also taking place.

After starting from the Dog and Bell pub in Deptford the Deptford Jack arrives with a fanfare of drums at the Rose and Crown in Greenwich. 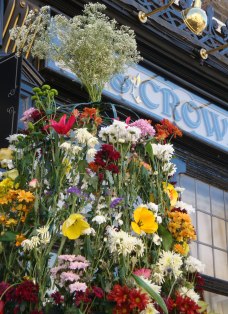 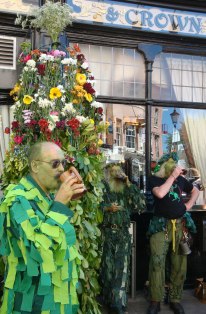 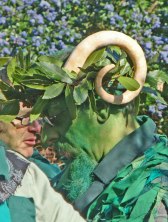 Some of the musicians 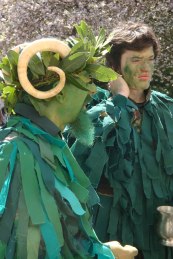 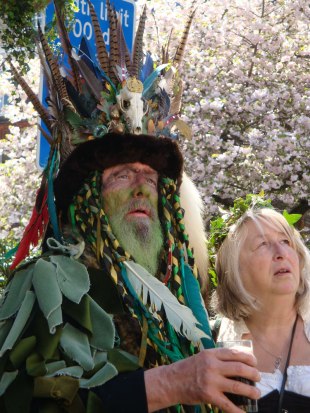 The route then goes past Hawksmoor’s St Alfege’s Church, around the back streets to the centre of Greenwich, past the Cutty Sark and through the Old Royal Naval College to the Star and Garter pub in Old Woolwich Road in the shadow of the power station. 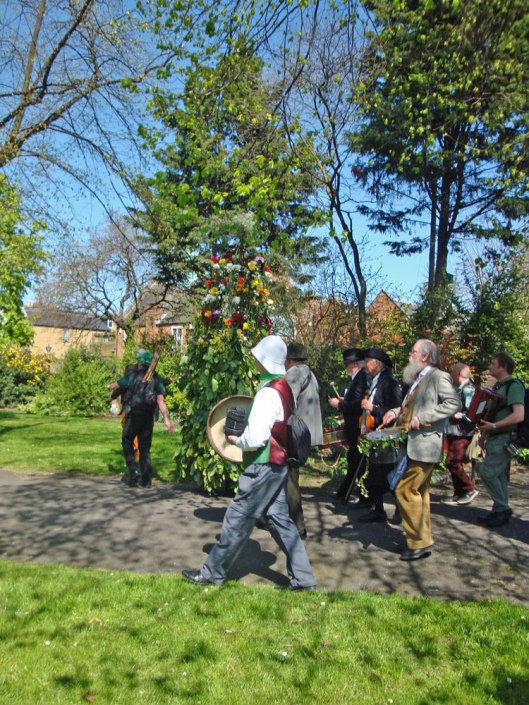 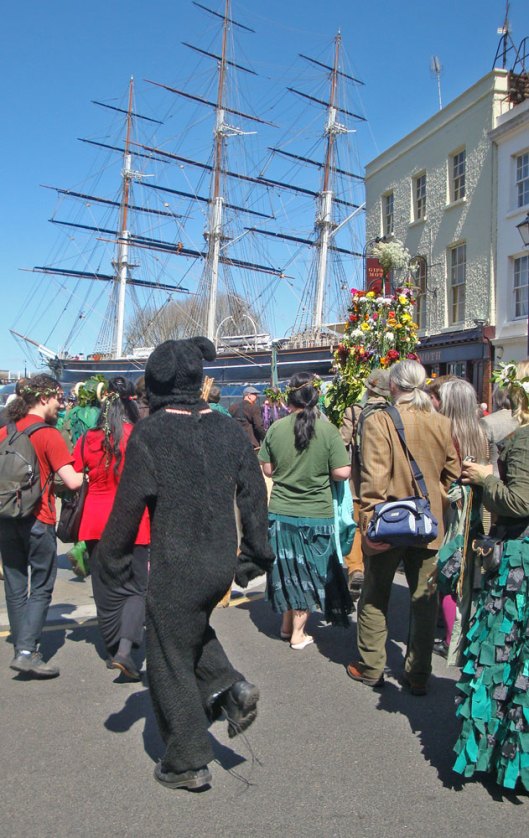 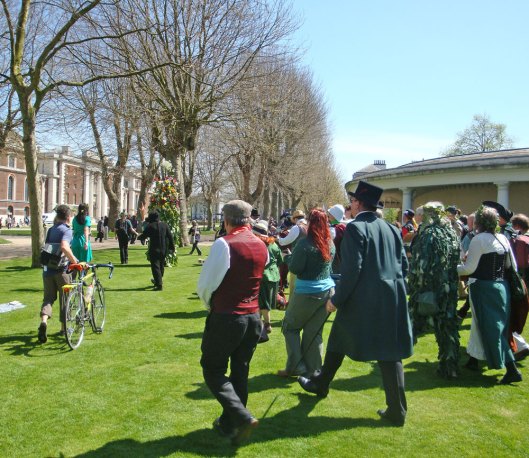 On to the Plume of Feathers, which was my favourite pub when I lived in the area as a student at Goldsmiths’ College, and from there through Greenwich Park, past the Queen’s House and on to the Richard I pub in Royal Hill. I can see why it is a royal borough! 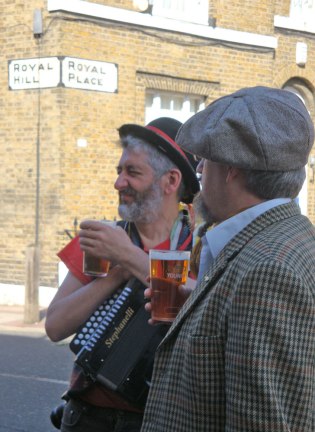 More back streets and the final destination , the Ashburnham Arms in Ashburnham Grove where I’m sure I used to know people living in a squat. Time’s have changed. 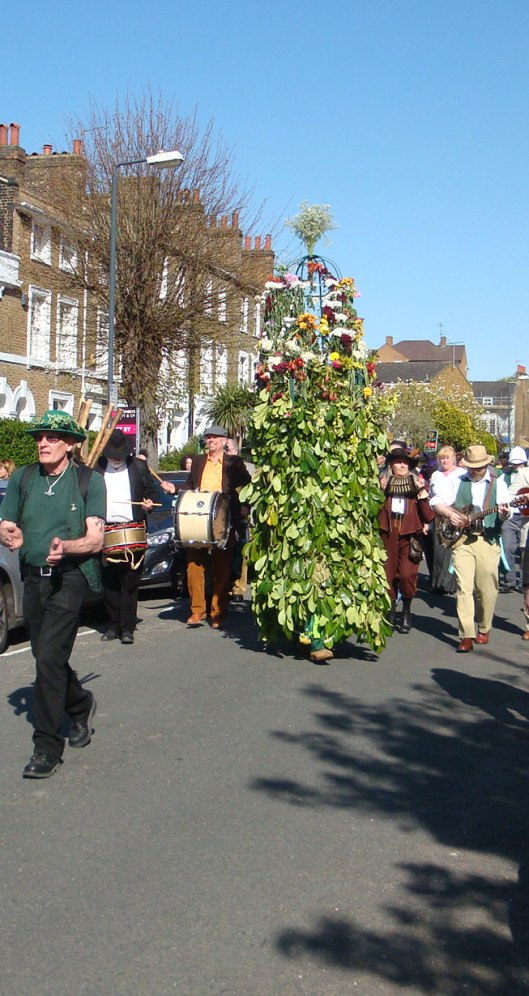 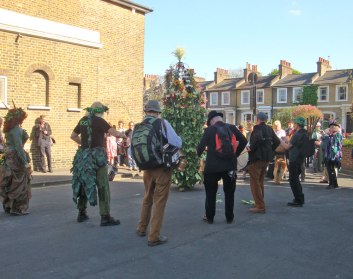 Jack recovers and another May Day ritual has survived.

Further Information and thanks to: